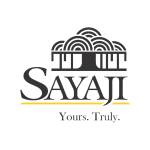 Sayaji Hotels Limited, (www.sayajihotels.com) has been leading a quiet revolution in hospitality from it bastions in Baroda, Indore, Bhopal, Kolhapur, Gurugram, Rajkot, Raipur Pune. It’s market leading achievements include Sayaji Effotel; Indore possessing the widest entertainment facilities for any hotel in India, highest per pax banqueting in the country, highest turnover and profitability for any hotel in non metro/tourist market in India. It has to credit 213 rooms, 6 restaurants and bars, an entertainment zone a discotheque and pub, a Lounge Wine Cellar, Cigar Bar, gym and spa. It’s top of the line accommodation Sayaji Grande has been hailed as the most contemporary hotel accommodation in India, it’s first in the history of Hotel industry, where through an Apple IPod guest is able to operate all electrical appliances; electronic functions in the room with PC in each room and butlers on call. To make our mark nationwide we have started our chain of restaurants Barbeque Nation. (www.barbeque-nation.com) Planned in 100 cities, the restaurant is going great guns in Mumbai at Pali Hills, Bangalore at Indranagar, Koramangla; J.P Nagar, Hyderabad at Banjara Hills, Gurgaon at Sushant Lok, Chennai at Hanuman Road, Delhi at Janakpuri, Chandigarh at Sector 26 , Lucknow at Gomti Nagar, Ahmedabad at Drive In Road, Jaipur at Tonk Road, Pune - Kalyani Nagar, Kolkata at Bidhan Nagar, Thane at Eastern Express, Vadodara at Alkapuri, Jallandhar; Lajpat Nagar. Very shortly we are coming up with more restaurants in Vashi, Noida and other metro, non metro cities.