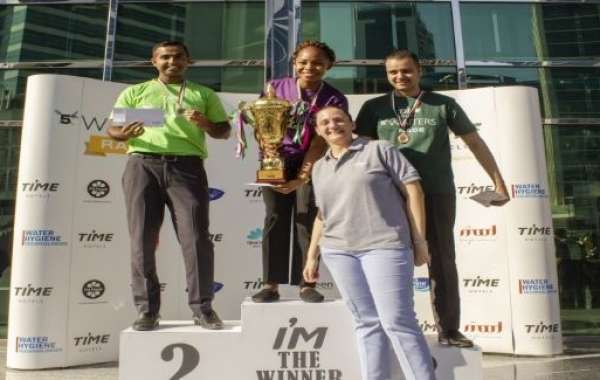 Christy Sardauna Garba, from Two Seasons Hotel & Apartments, beat off stiff competition to win the fifth annual TIME Hotels Dubai Waiters’ Race, which took place on 15 November 2019. Mohammad Muzambeer from Citadines Metro Central Hotel finished in second place, and Moustafa Altayeb Moustafa, from O’Learys Sports Restaurant, came in third.
Organised and coordinated by TIME Oak Hotel & Suites, which also acted as the starting point for the hotly contested race, waiters had to race to the Al Barsha Heights roundabout, before sprinting back to the start line – a circuit of 720m.

Waiters faced a unique challenge as they were required to complete the race with one hand carrying a loaded tray containing two full glasses and a bottle of water and the other hand placed firmly behind their back. The racing waiters were judged on the amount of water left and their overall time with points deducted for taking their hands from behind their backs.

Mohamed Awadalla, CEO, and TIME Hotels, said: “The annual Waiters’ Race is now firmly fixed in the hotel sector’s calendar as one of the most anticipated competitions in the emirate, and this year was no different with participants from a range of hotels eager to show off their speed and best waiting skills.”
The 8am start didn't deter entrants, with a total of eight competing hotels including Jumeirah Beach Hotel, Two Seasons Hotel & Apartments, Citadines Metro Central, JA Resorts & Hotels, O’Learys Sports Restaurant, TIME Oak Hotel & Suites, TIME Grand Plaza Hotel and TIME Dunes Hotel Apartments.

And adding a new dimension to this year’s event, TIME Hotels added a children’s race with Jaden Fernandes winning first place in the eight years old and under race and Zoya Malik clinching first in the nine to 12 years old competition.

More than 20 children participated in the race which involved them racing on a short track in front of TIME Oak Hotels & Suites while carrying a glass filled with water. Similar to the adults’ race, the kids were judged on overall time and the amount of water left in the glass on completion of the course.
“With a corporate mandate which focuses on adding value to people’s lives, our community outreach programme has seen TIME Hotels initiate and take the lead on a number of projects across the emirate, with the annual Waiters’ Race and now the children’s race being key events,” said Awadalla.
This year’s event was sponsored by Fit Fresh, Diversey, Egreen - Al Hutaib, Sinosung International FZE, Rich Printing Press, Water Hygiene Technologies, Dubai Refreshments, Mood Espresso, NRTC and H.K. Enterprises.